Portland, Oregon was on my U.S. bucket list for a long time. I always saw beautiful pictures of the coast, the street art, donut shops, and the picturesque coffee spots around town. It’s like an Instagrammers heaven, but more so just a gorgeous city with so much character and lots to do! Even with all my high expectations, I didn’t think I would love it as much as I did.

A couple days beforehand, I texted my good friend John from high school who recently moved to Portland with his wife, Mazie. He said he had the day off work and offered to show me around the city. It was such a gorgeous day out, which apparently was rare for this time of year. Normally it rains a lot, so I got lucky this day 🙂

We walked around downtown for the first half of the day, checking out Powell’s Book Store, Deschutes Brewery, the Pearl District, etc. All the must-see spots. 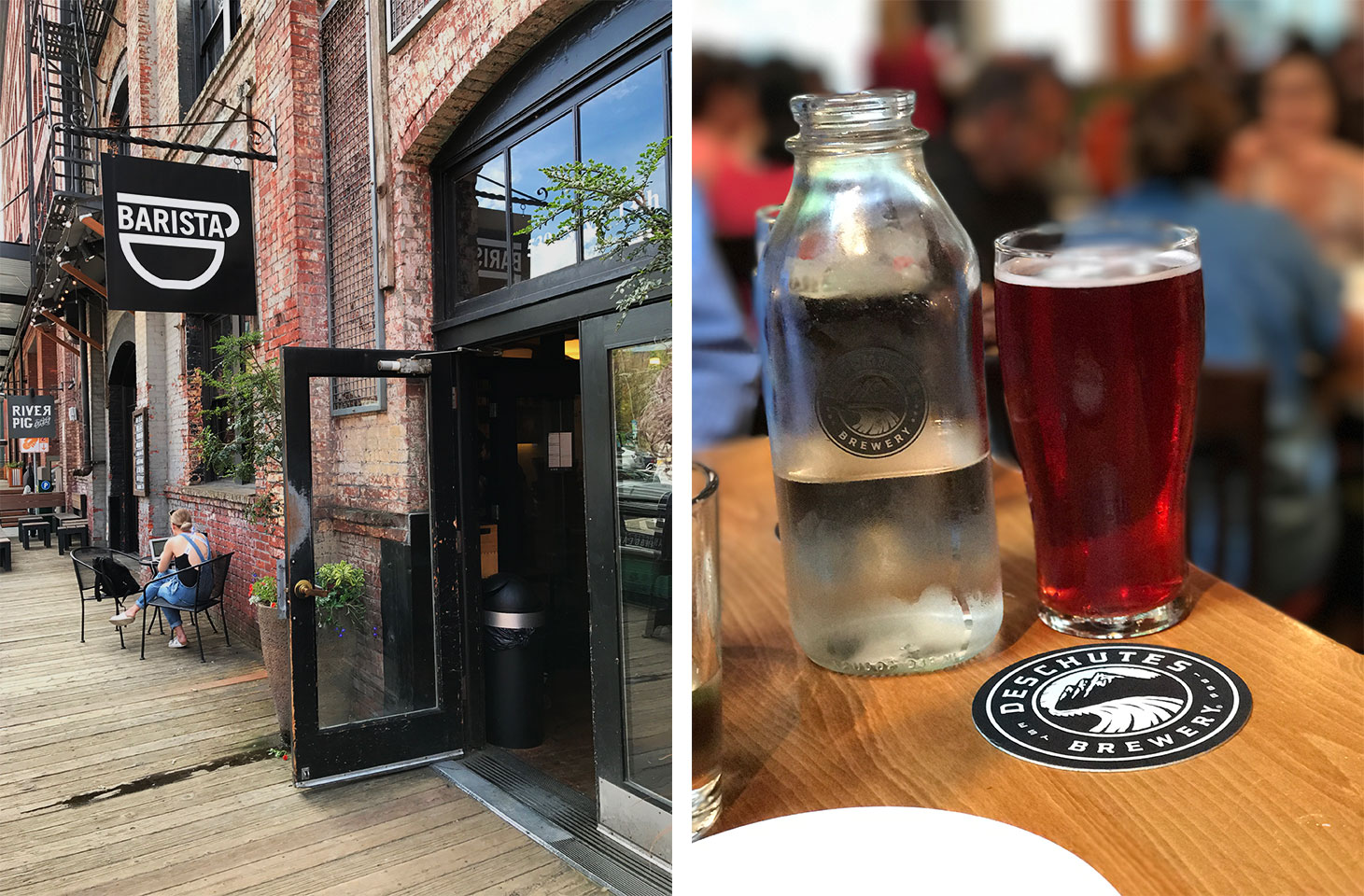 John lives just across the river above Good Coffee, one of the places I was dying to try in Portland! It’s a popular spot according to my Instagram feed and I can see why after I tried a couple coffees and lattes (Yes, a couple.. I needed to wake up, ok!!)

We then grabbed their adorable pup Mari and drove around to Division Street, got donuts at Blue Star and stopped in a couple vintage shops. We drove through some gorgeous little neighborhoods with the most beautiful historic homes. I felt like I got one of the best local tours and a true Portland experience! THANK YOU JOHN! 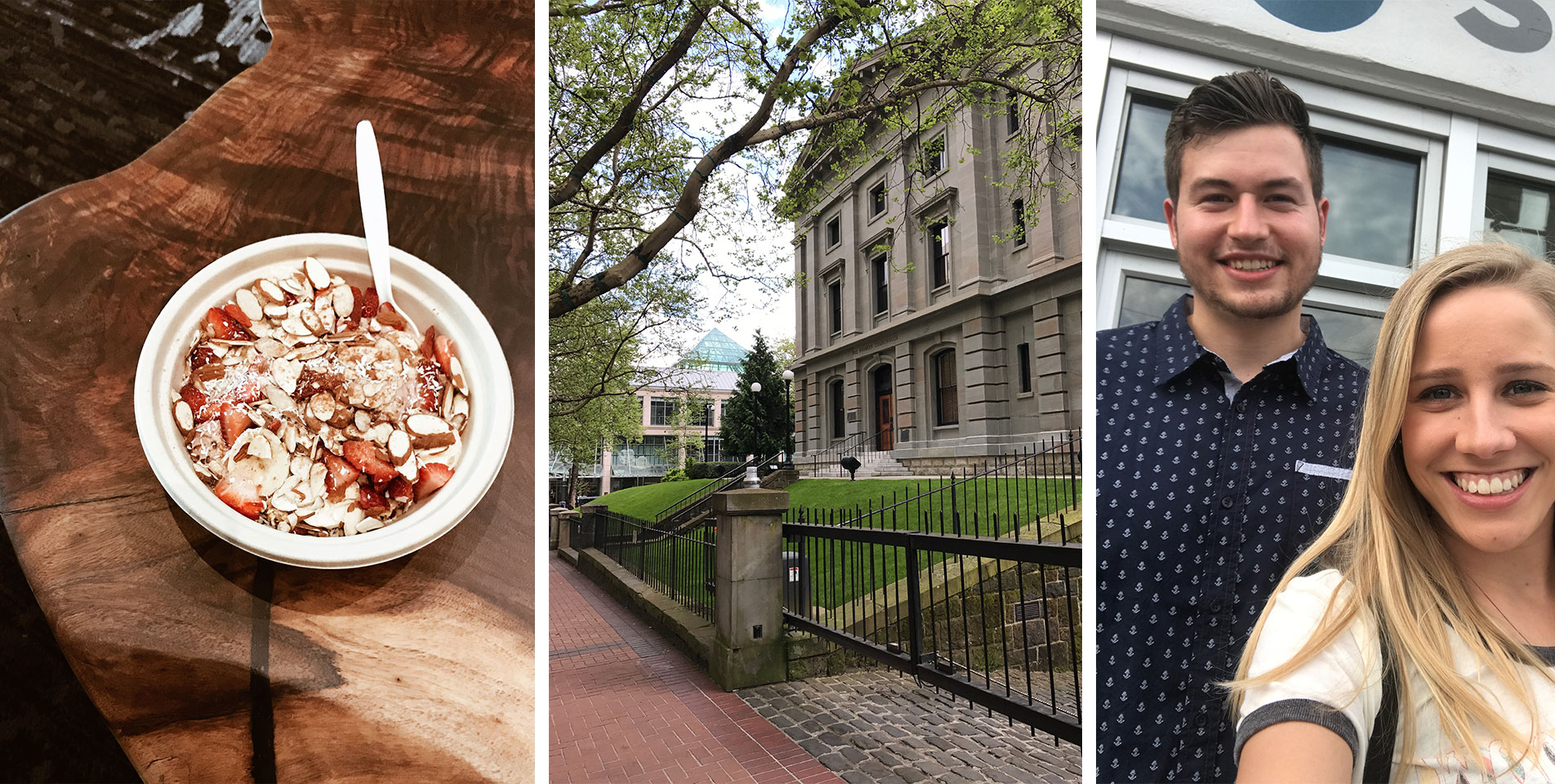 By this time, Mazie was getting off work, so we met her at this little food truck village near their apartment. This place was crazy adorable and so good! Just when I thought nothing could make me fall in love with Portland more!

I cannot wait to go back to Portland and experience it all over again. This city won me over. Thanks, Portland <3 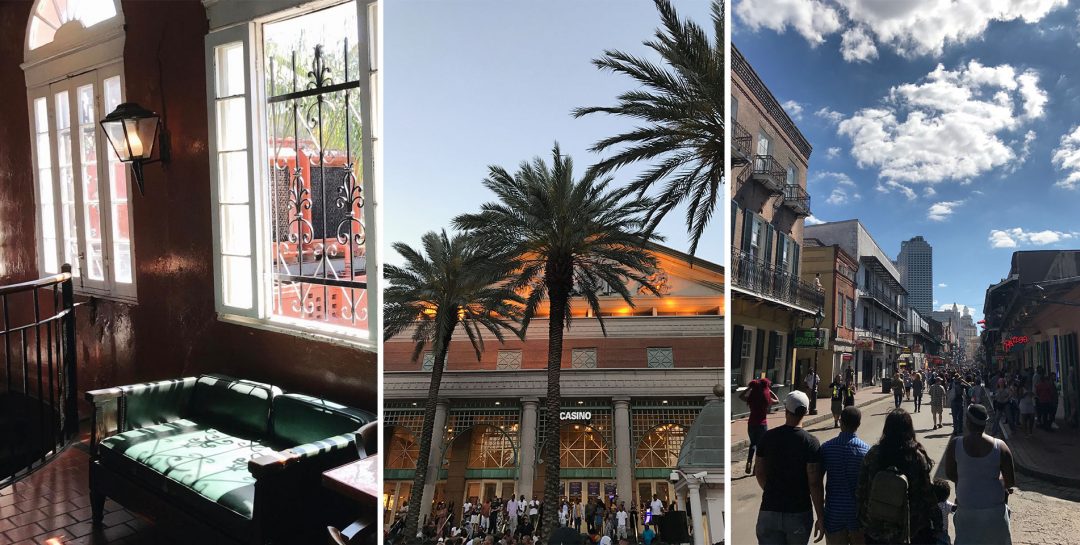 I didn’t get my first layover until about a week into flying. All my friends from training were enjoying LA, beaches, and international trips for their firsts. And here I was, getting called at 3am on my “on call” days for turns (trips where you fly there and back in a day without getting off the plane). I flew to Santo Domingo and back one day, San Juan and back the next. There’s nothing worse than flying to beautiful, tropical places and not even being able to get off the plane!

My very first flight as a flight attendant!

Finally on day 9 of being a flight attendant, I got called in for a trip to LA with a nice long layover, but then it gets cancelled. So scheduling calls me again with a change of plans… now I was headed to New Orleans for a 17 hour layover!

I had never been to New Orleans before, so I was super excited. I had one of the sweetest crews, and one of the girls took me under her wing and showed me around Nola.. We went for drinks at Pat O’Brien’s, a classic French Quarter bar, and a couple others with live music and drinks. Then we walked down Bourbon Street and over to the Casino. I guess I didn’t realize New Orleans has casinos because I didn’t have much cash. But that was definitely a good thing, because by the end of it I was cashless.

I definitely had a classic New Orleans experience and can’t wait to go back and see more of this historic and fun city. 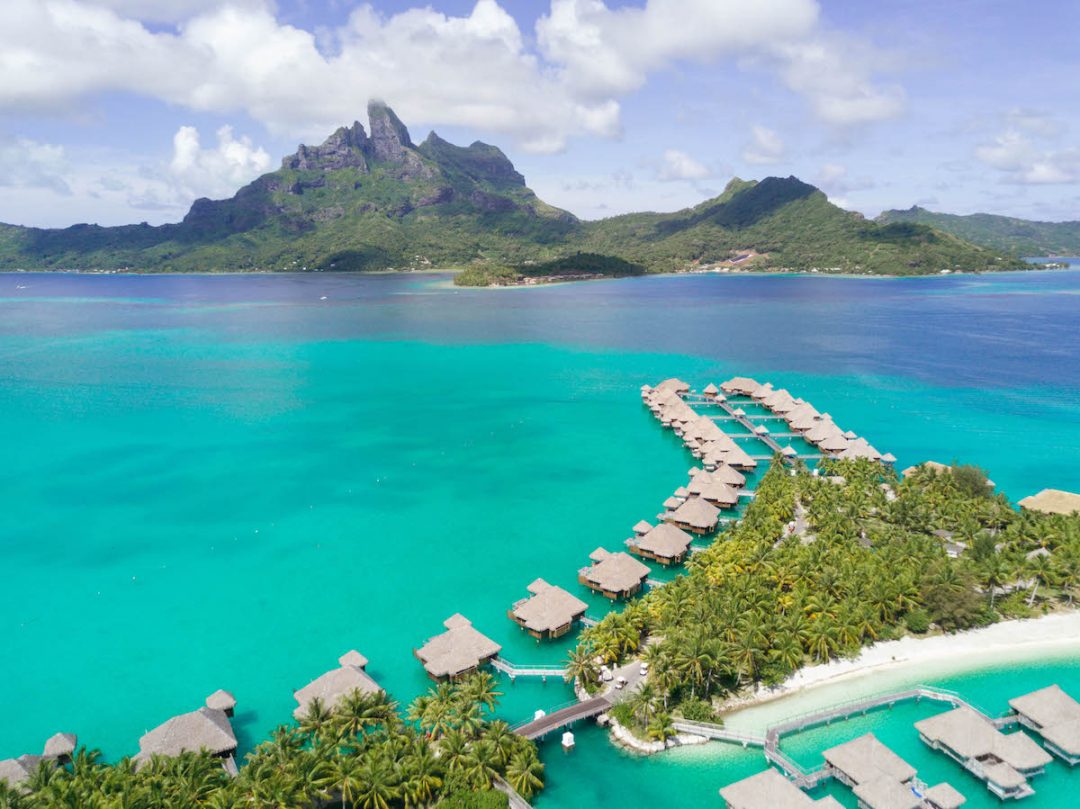 Without a doubt, this will go down as one of the most incredible places I’ve had the opportunity to see. French Polynesia is about as close to paradise as I think you could get. I say that because it is truly as picturesque as you can imagine. The incredibly clear turquoise (and calm) water, the tall skinny palm trees overhanging the shoreline, colorful fish swimming all around you, and the feeling of being castaway on a deserted island. 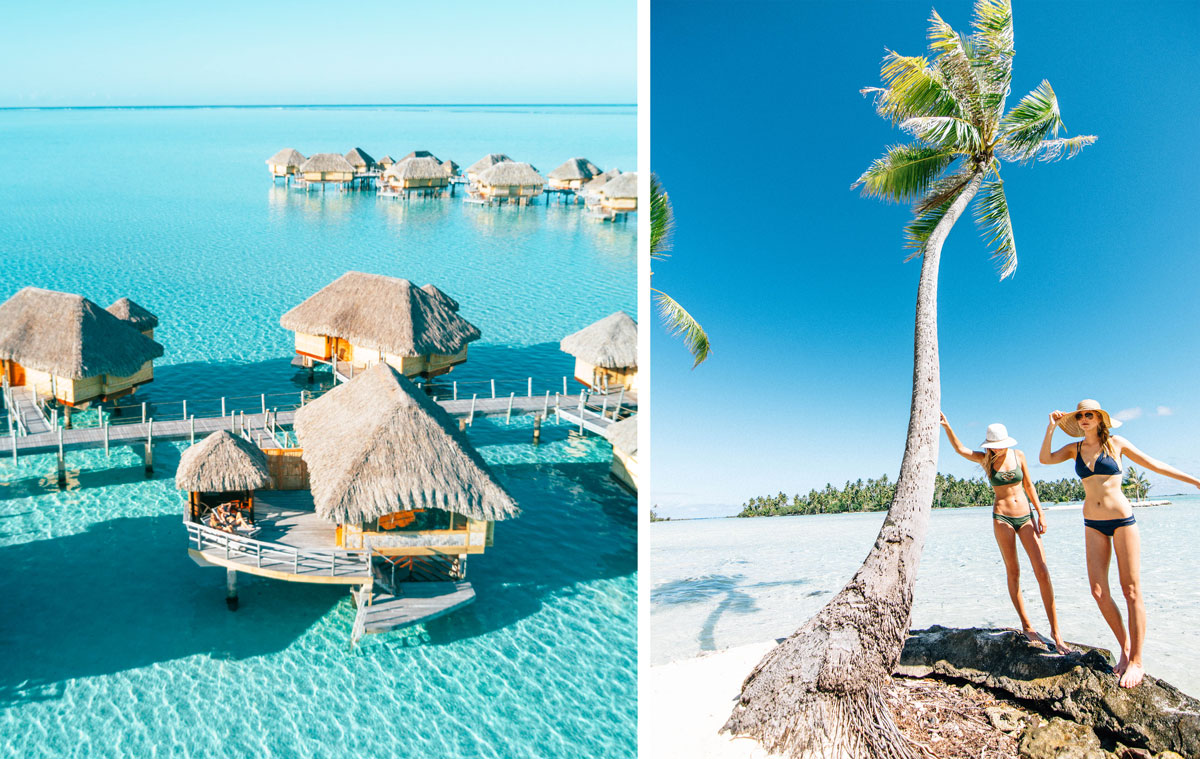 My long-time childhood best friend/travel buddy Laura invited me along for this adventure of a lifetime. She is a travel agent and was given the opportunity to see first-hand, the resorts that many of her honeymoon clients get to enjoy. I was lucky enough to be invited along as “the photographer” (but more like the mooching BFF). Thanks Laura!!!

Most of the resorts in French Polynesia are located on their own little islands. They are only accessible by boat and the few who actually reside there are the most friendly culture of people you’ll ever meet. All of the locals were so welcoming and genuinely cared about getting to know us and making sure we enjoyed our time. We visited three islands/resorts during our stay in French Polynesia: Le Taha’a, Bora Bora, and Rangiroa.

At the beautiful island resort of Le Taha’a, we had the opportunity to take some really cool excursions. We did a day trip island safari tour which included a stop at a black pearl farm, vanilla bean farm, and countless scenic views.

There was plenty to do at the resort as well. It’s known to be one of the most secluded, private islands in the country (and because of this, it attracts a lot of A-list celebrities). On our free days we did lots of snorkeling in the coral garden, jumping off our private bungalow dock, and basking in the sun. We even got to relax for a spa day where we were treated to an amazing massage (my first ever!) with local vanilla oils. 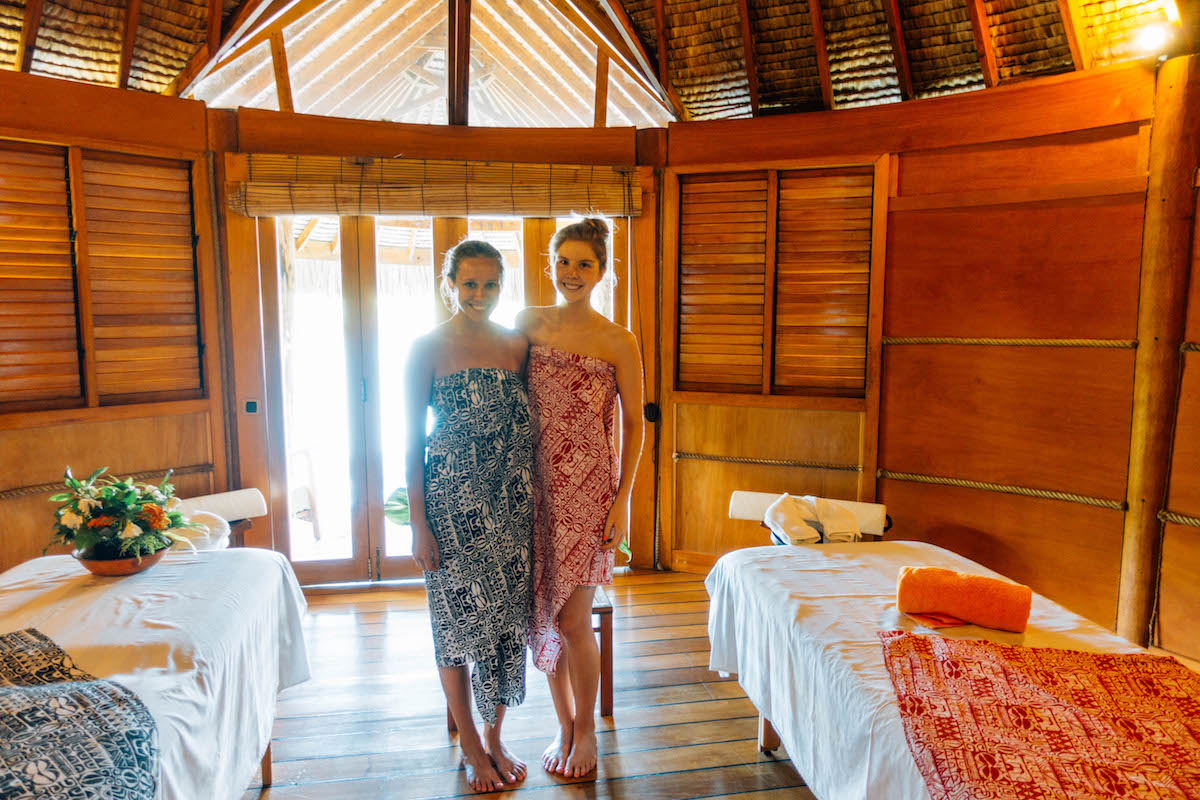 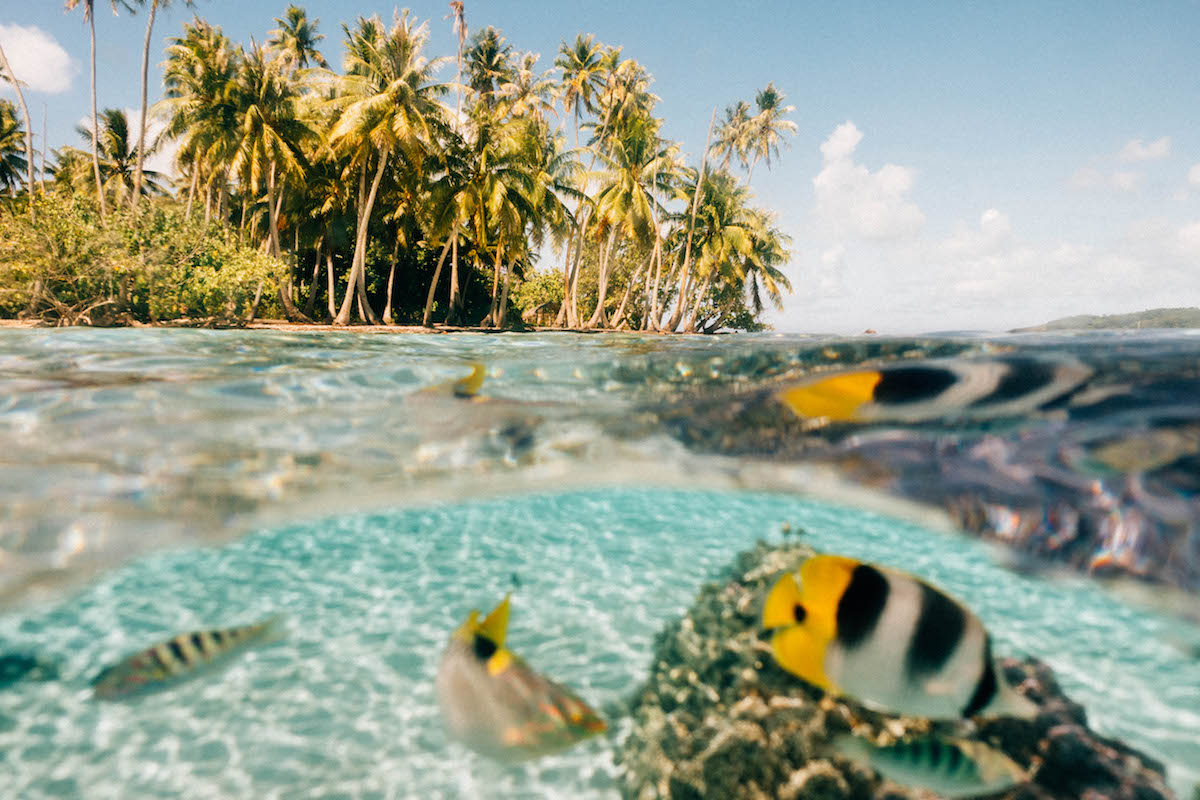 I should also mention the food was amazing at Le Taha’a. Normally, there is a daily breakfast buffet in the restaurant, however while we were there, they were rebuilding the roof (out of palm leaves!!). Lucky us, this meant we got free room service every morning delivered right to our bungalow… 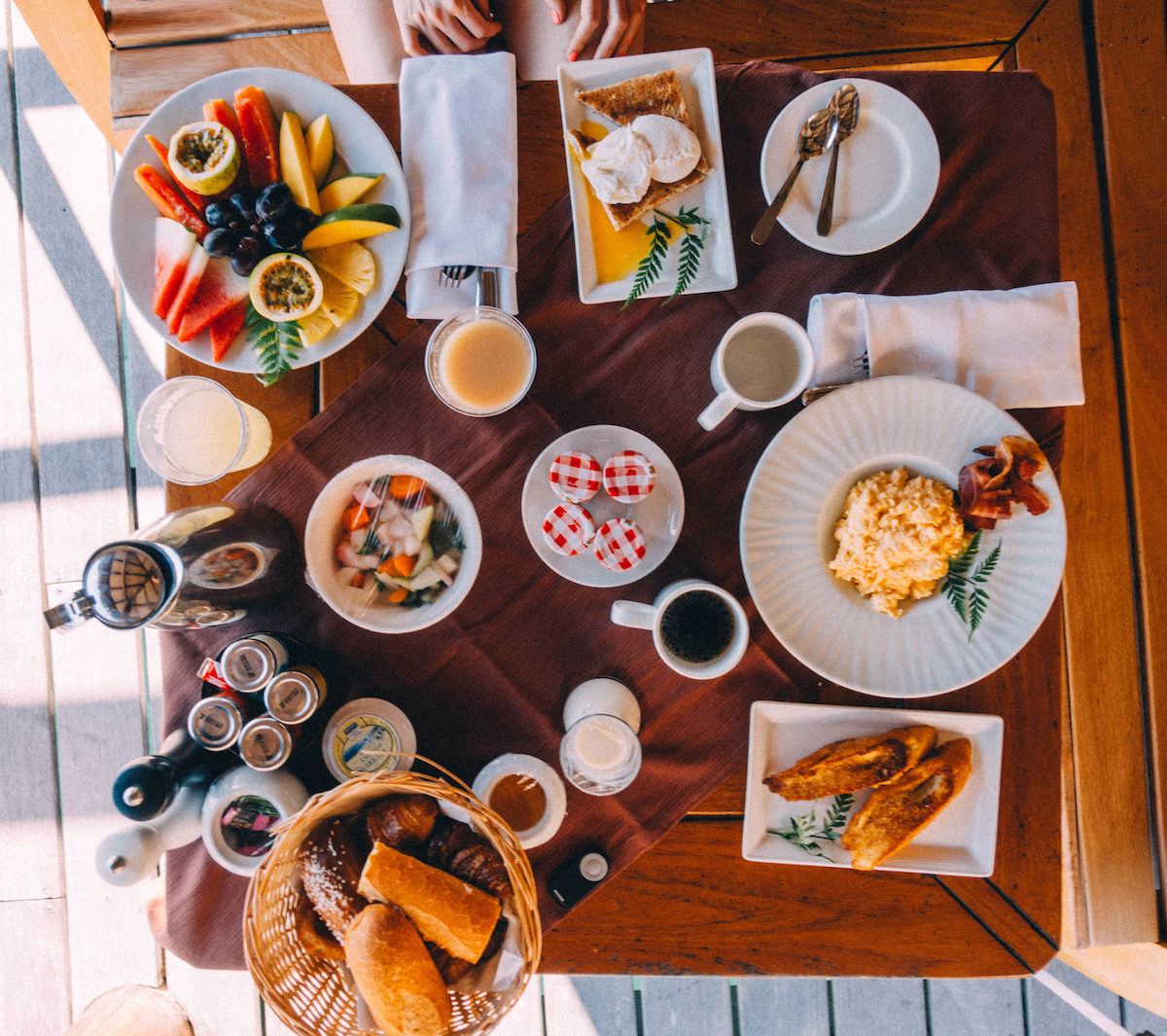 On one evening, we were able to attend a dinner show with traditional Tahitian fire dancing. I’ll post a video soon of this trip because the pictures just can’t do it justice. Their dancing isn’t just for show, or just for the resort guests. It’s actually an age-old traditional, authentic dance that the locals perform regularly with their families and for special occasions/events in their island communities. It was so impressive!

We actually became friends with one of the nicest guys who worked at Le Taha’a and lived on the island across the water from our resort. His name is Jean-Louis and he has the sweetest family who all invited us over to their island for a local, authentic dinner at a food truck. We took a boat that’s meant for the workers of the resort to transfer back and forth to their home island. At the boat dock there, is the truck with super authentic and delicious food (all of which we couldn’t read or pronounce on the menu).. By the way, not many Tahitian people speak English, except for the main resort employees. Jean-Louis told us he taught himself English through YouTube, which was pretty incredible considering he was so fluent you would have thought it was his first language!

Next up, we ventured to the dreamy island of Bora Bora. Here we were treated to another beautiful overwater bungalow and some of the most incredible views. 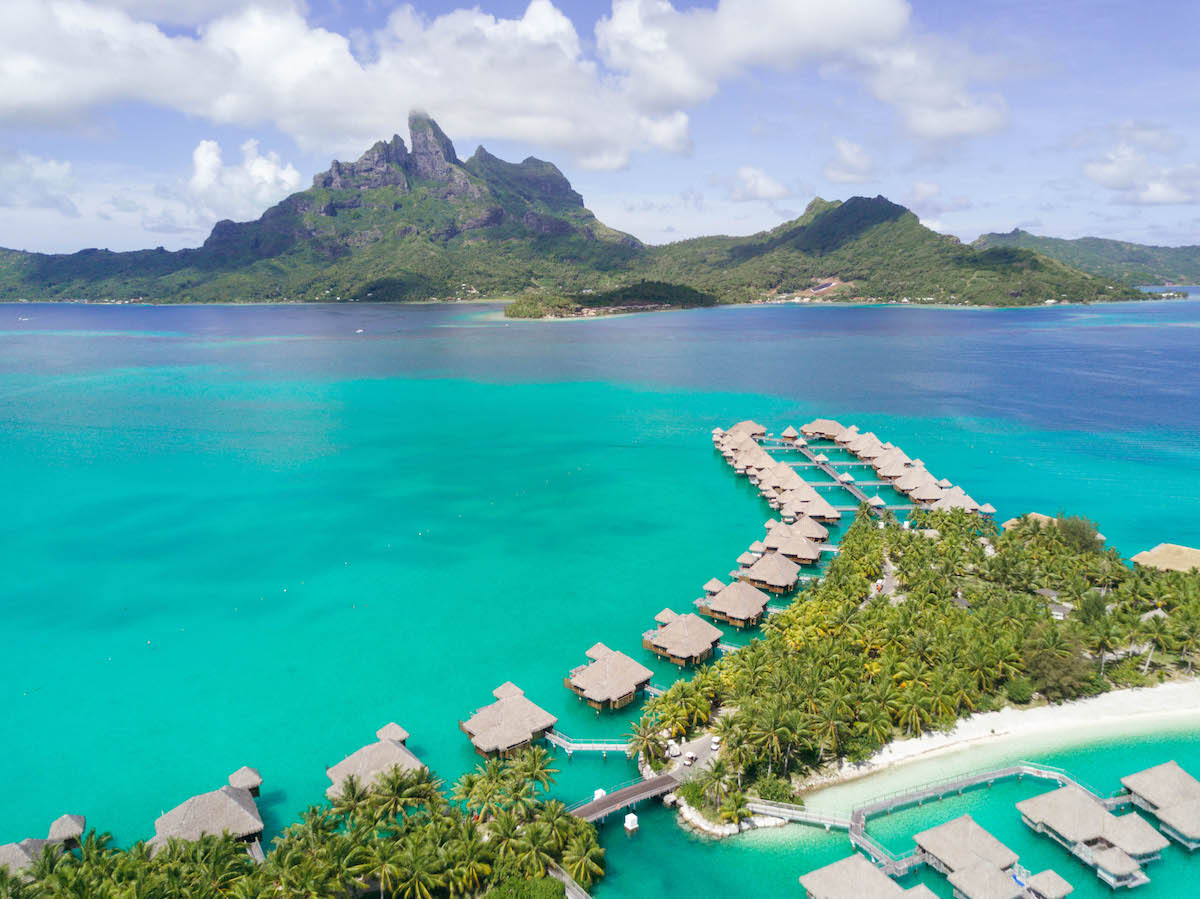 This resort, St. Regis Bora Bora, was much larger than the last. There were several parts of the island with snorkeling lagoons, spas, and restaurants. They provide guests with cute bicycles to roam around the island, and we took full advantage of it! Some other little perks we appreciated were the free sunscreen stations everywhere (not your average spf! This stuff smelled and felt so amazing we filled a bottle to bring home!!) and the kayaking that we were able to paddle right up to our personal bungalow. The breakfast buffet views weren’t so bad either.

Another favorite in bora bora was the iconic hammock in the ocean. This hammock was preyed upon by all the guests, so we dedicated a morning to wake up early for sunrise and be the first ones to hijack the hammock! Sooo worth it. The snorkeling lagoon at St. Regis Bora Bora is also a special part of the island. It’s basically a river that loops through the island so you can swim along the current with all the beautiful fish.

Our last stop in French Polynesia was at the castaway island of Rangiroa. It’s one of the most undeveloped of the islands you can stay at, and it is absolutely beautiful. It’s famous for its adventurous excursions and scuba diving sites. We decided to take a day to go swim with sharks and it was the most incredible experience! We had about an hour long boat ride out to this little island in the middle of the ocean. Here we stopped to have lunch where our guides cooked us a BBQ on the beach. There are little reef sharks around the island in the shallow water so we swam a little with those to build up our confidence for the big sharks… after lunch we headed out to the deeper waters and the guides threw in our leftover lunch and some dead fish to attract the sharks. They began swarming the boat swimming in circles and jumping out of the water to attack their food. Once they were satisfied and calmed down, we jumped in! I was freaking out at first, but quickly felt at ease when I got in the water and realized I was surrounded by these beautiful creatures that were more scared and curious about me than I was them.

This was by far one of the coolest experiences I’ve had in my life. Sharks have always been one of my favorite animals and I am so glad I had an opportunity to swim with them (and even touch a couple)! 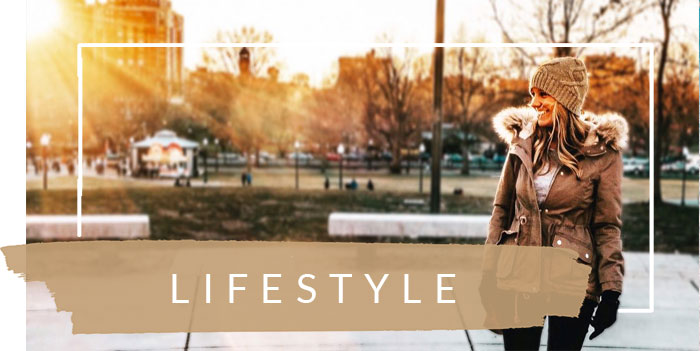